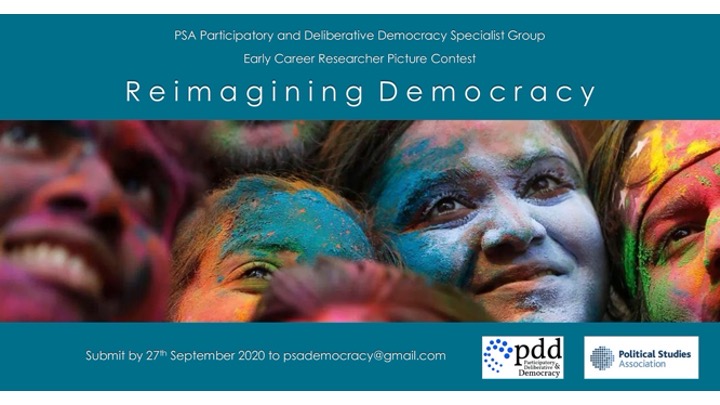 Million thanks to everyone participating in this year’s PDD picture contest! We received many inspiring pictures that “reimagine democracy” in creative, novel, surprising ways. The jury, composed of Chantal Mouffe, Michael Saward and the PDD convenors selected three winners who have been awarded a book prize.

Jury statement: The jury was particularly impressed with Anvi Pingali image entitled “Unbiased democracy”, which presents a series of seven watercolour portraits featuring women from around world. The seven portraits were painted by Anvi herself. The jury selected this submission because it aptly combines two democratic core principles that are often deemed as at odds with each other: equality and diversity. The image visualizes the democratic ideal articulated by feminist democratic theorists and illustrates how the visibility of women in their full diversity is a precondition for democracy. The image makes a valuable contribution to reimagining democracy by conceptualising democracy as a place where inclusivity and diversity flourish and biases are diminished.

Liam McLoughlin: ‘Now you see me, now you don’t’: Reimagining Control in The Digital Age

Jury statement: The jury was fascinated by Liam McLoughlin Birbeck’s image entitled “Now you see me, now you don’t — Reimagining Control in the Digital Age” because of its ability to illustrate the simultaneity and the interactions between ‘old’ and ‘new’ mechanisms of control. The image shows a fragment of the Berlin Wall — once the unambiguous symbol for barriers and political/ideological divides – next to a CCTV camera. The jury found this image particularly important as it highlights the changed and ever-changing boundary conditions for democratic political action. It shows that a reimagination of democracy requires vigilance particularly towards mechanisms of (state) control that are less apparent than large walls — and dangerous precisely because of their invisibility.

Jury statement: Alexander Geisler’s image impressed the jury both in terms of the artistic quality of the photo and the message it expresses. The picture conveys an acute sense of a moment of change, when twenty randomly selected voters in the Swiss municipality of Sion deliberated and reached a consensus on affordable housing. It powerfully communicates the mutual appreciation of the participants and the elating feeling of collective achievement. The beautiful background of the former chapel, with its suffuse light embracing the participants, creates an interesting friction with the supposed secularism of democracy. At the same time, however, this background provides an inclusive space beyond religious or cultural differences. Democracy is reimagined as a celebration of an egalitarian community.

Feel free to reblog anything on this site, with attribution to the Participatory and Deliberative Democracy Group (PDD).

This site is licensed under a Creative Commons Attribution-NonCommercial-ShareAlike 4.0 International License.